Sharing the below opportunity from the World Justice Project, you can see more at their website here. The WJP Anthony Lewis Prize for Exceptional Rule of Law Journalism acknowledges journalists from around the world who have contributed to increased awareness and understanding of the foundational importance of the rule of law.

The 2020 competition is now open for the WJP Anthony Lewis Prize for Exceptional Rule of Law Journalism. Applications and nominations are due March 19, 2020 . Help us recognize and celebrate outstanding reporting on rule of law issues such as:

The $10,000 USD prize is open to journalists worldwide. Nominate others or apply yourself by March 19!

All nominations and applications are due March 19, 2020.

To nominate a journalist—including yourself—please fill out the 2020 entry form with the following information:

Email nomination forms or questions to: press@worldjusticeproject.org. Please include “Anthony Lewis Prize” in the subject line. Nominations are due by March 19, 2020. 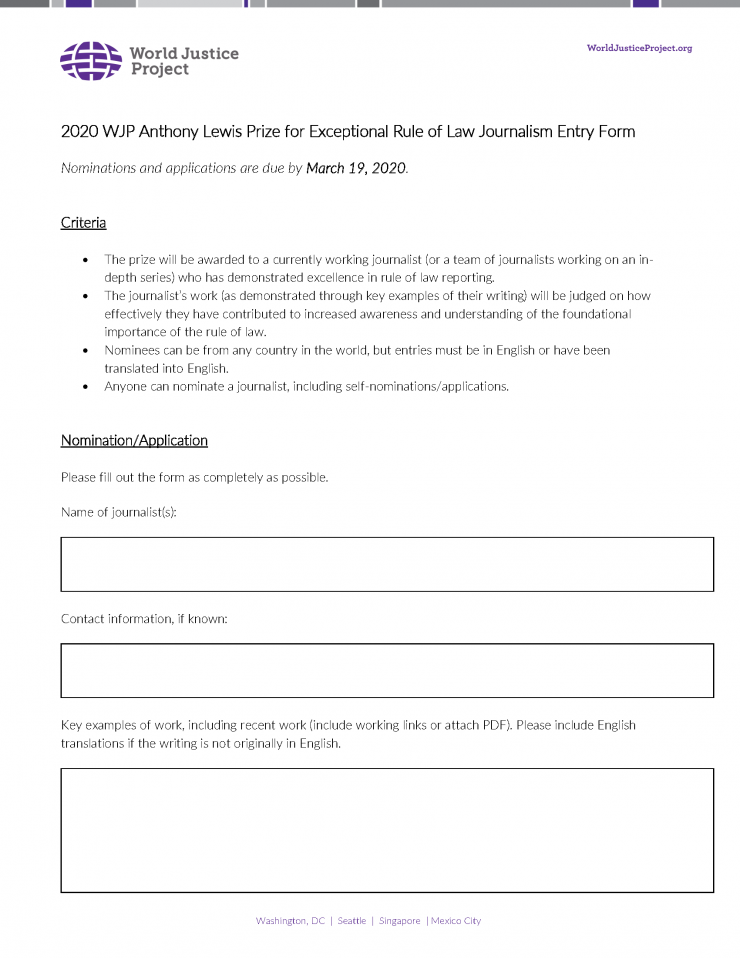 Why Recognize Reporting on the Rule of Law?

Effective rule of law reduces corruption, combats poverty and disease, and protects people from injustices large and small. It is the foundation for communities of justice, opportunity, and peace—underpinning development, accountable government, and respect for fundamental rights.

Traditionally, the rule of law has been viewed as the domain of lawyers and judges. But everyday issues of safety, rights, justice, and governance affect us all; everyone is a stakeholder in the rule of law. Vigorous reporting and a free, open press play a unique and important role in maintaining and upholding the rule of law throughout the world. (Read more about the rule of law.)

Anthony Lewis (1927-2013), a friend and inspiration to the World Justice Project, was a Pulitzer Prize-winning author and journalist credited with transforming legal journalism in the United States. Lewis covered the Supreme Court, the Justice Department, and legal affairs for The New York Times in addition to serving as a columnist as well as the paper’s London bureau chief. He is the author of five books, including Gideon’s Trumpet , which describes James Earl Gideon’s landmark U.S. Supreme Court case concerning the right to legal counsel. Lewis’ reporting on the establishment of the Constitutional Court in post-apartheid South Africa helped inspire the creation of the World Justice Project. He was also an active participant at WJP’s first regional meeting in 2007.